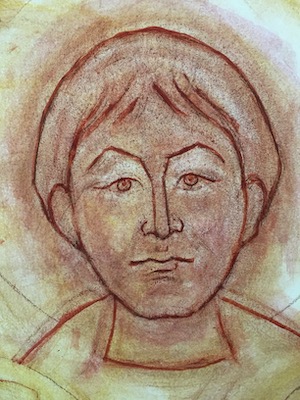 St. Peter the Aleut is the Schrodinger’s cat of American Orthodoxy.

He is an Alaskan saint who was martyred in California in 1815, or he possibly didn’t exist at all.

Between what might have been and what is is a gap that is as narrow as a hair. St. Peter is an ever-flowing stream of unanswerable questions.

The story is that he was an Alaskan native, whose name in his own tongue was Chukagnak, with the baptismal name of Peter. As a native of Kodiak Island, he might have been Aleut or maybe Sugpiaq. He was part of the crew of a Russian ship hunting otters and seals off the coast of California.

Then whoever was holding him captive ordered some California Native Americans to cut off his toes one by one, then his fingers, while demanding that he become Catholic. When he continued to refuse, they finally eviscerated him.

St. Herman responded by making the sign of the Cross and saying, “Holy New Martyr Peter, pray to God for us!”

The Alaska Diocese of the Orthodox Church in America glorified St. Peter as a saint in 1980.

So what’s the truth? Qualified historians of good will both inside and outside the Orthodox Church dispute the facts, some stating flatly that St. Peter didn’t exist.

Other people choose him for their name saint. There are churches Arizona, North Dakota, Louisiana, and Alberta, Canada, in America that are dedicated to his memory.

I’m not comfortable when “facts” come into conflict with “the story.” But sometimes it happens. The facts are uncertain at best.

The story is that an unsophisticated Native, in a strange and distant territory, faced the challenge of martyrdom and chose to remain faithful to Christ, even to the point of death.

Did it happen? I don’t know.

Could it happen? What if his baptismal name was John, not Peter? What if his tormenters were outlaws, not Catholic or government officials? What if they demanded that he steal for them, not convert to Catholicism? I’m not suggesting that these are the correct facts, only pointing out that even if they were, the essential story is the same.